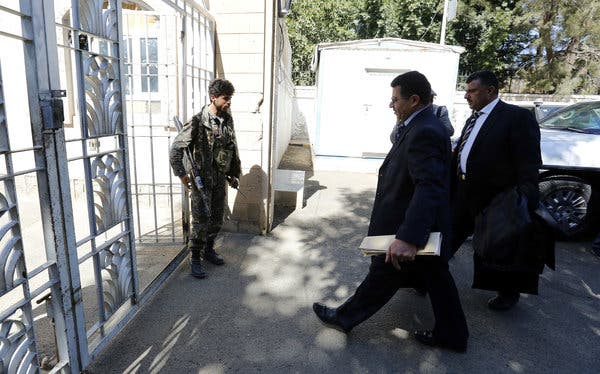 The Iran-backed Houthi militia delegation to the peace negotiations in Sweden has flown from the capital Sana’a on Tuesday, which is a very serious move to signals the kick off of talks that might end the civil war that has effected millions of Yemenis across the impoverished country.

The officials of the Iran-backed militia stated that the preliminary consultations with a delegation from the Saudi-backed government led by President Abdu Rabbu Mansour Hadi could begin as early as Wednesday.

For his part, the UN Special Envoy for Yemen, Martin Griffiths, was also aboard the Kuwaiti airliner that left Sana’a, the capital, on Tuesday, one day after 50 wounded Houthi fighters were allowed to fly to Oman for treatment as part of an elaborate sequence of confidence-building measures.

The UN envoy has offered to accompany the Houthis to overcome their fears that the Saudi-led coalition, which controls Yemeni airspace, might intercept the flight, a senior United Nations official said.

The plane carried international and Yemeni hopes for the fragile political process. On Oct. 30, amid growing concern at the humanitarian crisis in Yemen, Defense Secretary Jim Mattis set a 30-day deadline for a cease-fire in the conflict, which began in 2015, and for the start of peace talks.

Mr. Mattis got part of his wish on Tuesday. Fighting raged on the ground even as talks moved forward. The most intense battles lately have been fought in the Red Sea port of Hudaydah, which the Saudi-led coalition is trying to snatch from Houthi control, and which is key to international efforts to stave off a looming famine across Yemen.

The United Nations redoubled its warnings on Tuesday when its humanitarian coordinator, Mark Lowcock, appealed for $4 billion to deliver aid in Yemen, which he said is likely to remain the world’s greatest humanitarian crisis in 2019. The United Nations estimates that 57,000 people have died since the conflict started and that nearly four million people had been forced from their homes, including 600,000 displaced by the battle for Hudaydah.

Peace talks and external support could take the edge off extreme suffering, but that included “a lot of supposes,” Mr. Lowcock said.